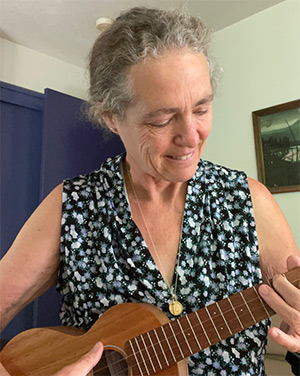 Hi! My name is Janet Foley, I’m at the School of Veterinary Medicine at UC Davis, and I’m a member of the Board of Directors for the Friends of the Amargosa Basin. I wanted to introduce myself and my work to you and share my excitement for creating the US’ newest National Monument!

Coming to California from New England, by way of Virginia, I had never seen a desert. I grew up rural, with my fondest memories being of time spent in the woods alone or with my dad and his dog. He was an ardent hunter but towing along his vegetarian daughter who talked about water fairies and her herb garden, he was more than happy to leave the gun at home and teach me to read sign, train the dog, or just walk quietly and watch for the birds. My plan in California was graduate school- by now I was a scientist but still not set in any particular direction. The direction became clearer, and I went to veterinary school, practiced for a while, and then got my PhD studying the ecology of diseases.

On a beautiful spring night, my friend (eventually to become my husband) and I drove into a camping spot at Anza Borrego State Park and my heart felt like it would burst with joy at the immense beauty around me. The little chollas seemed to wave their friendly arms in greeting and I was over the moon with excitement as I saw the innumerable holes and sign of kangaroo rats at the bases of the creosote bushes. But my friend cautioned me not to walk around too much in the dark (lest the friendly cactuses show their prickly side) so I contained myself and slept, to awaken to a land of magic that words cannot do justice.

Too many years fast-forward, and this time I’m a professor in the vet school at Davis, heading, again in the dark, down the highway from Pahrump with my friend and collaborator, Deana Clifford. Coming over the hill, we see the lights, you know, like all 5 of them or so, that mark tiny Shoshone, as Deana gushes about how amazing this place is. We were coming because I had been asked to consult on a red crust that was built up and destroyed the external ears of the Amargosa vole, one of the most endangered creatures in the United States. At the time, virtually all of my research was on rodents, typically squirrels, chipmunks, flying squirrels, woodrats, deer mice – all the little guys that get ticks and fleas and sometimes maintain the bacteria that can spillover to humans and pets and cause diseases like Lyme disease and anaplasmosis. I often saw red build-up on their ears too, and tended to think that what the biologists suspected to be a fungus was actually a cluster of almost microscopic chigger mites. 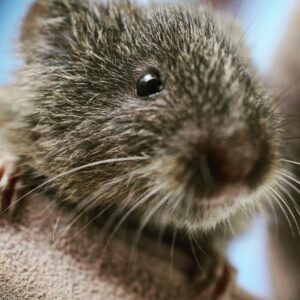 We were here to initiate our research, first on the ears and their mites, then on all the other reasons voles are so rare (spoiler alert – it’s because they are absolutely isolated and utterly depend on the desert springs and little marshes in the Amargosa). We’ve created a captive breeding colony of them to serve in an emergency in case they lose any more of their habitat to fire or other forces of nature or man. We’ve discovered what their average litter size is (4 pups), what a vole dies of when it gets to old age (cancer sometimes), what 30+ species of snake, bird, coyote, bobcat, and other animal eat them, what diseases they get in nature, how to get rid of the oriental rat mite that invaded the colony on straw (which we now autoclave), and that vole dads will help take care of the pups when mom goes out for food.

All of these collaborative studies with reams of brilliant undergrads, grad students, post-docs, random people we found on the street (well no, but significant others and our kids, yes) worked within a multiple-agency and academic institution legal framework established by the Department of Interior called the ad hoc Amargosa vole team. Eventually, we came to learn that there is one overarching threat to voles and to their entire ecosystem with the plants and animals that live there, and that is water scarcity, which seems to keep getting worse with upstream aggressive water depletion near urban centers, exacerbated by climate change and drought. OK- you remember that I’m a veterinarian and ecologist, so what made Deana and I think that we could rehabilitate land in Shoshone to recreate the marshes that used to be there and translocate voles from Tecopa to restore the population? And now, with funding from the Bureau of Land Management (and a LOT of help!), we’re building bridge marsh habitat in Tecopa and helping our little friends survive this drought. We’re doing it!

The vision of the Friends of the Amargosa Basin is to connect the natural lands from Death Valley through Amargosa to Mojave Natural Preserve around a matrix of small towns that thrive with ecotourism and responsible land use for the benefit of people, especially the next generations, and for all the plants, animals, rocks, and water that “live here”. In the long run, this is really the only the chance the vole has. This historic drought is as bad as it comes, until climate change brings an even worse one. We can’t be here all day every day to hold their little paws – it has to be about protecting their land. I often get pigeonholed as the vole lady, but let me tell you when you look deeply into the eyes of a Shoshone pupfish, you can’t help but fall in love. Please help me save this desert treasure. I know this note is too long but if you’re still reading, please consider making a donation to support our efforts.